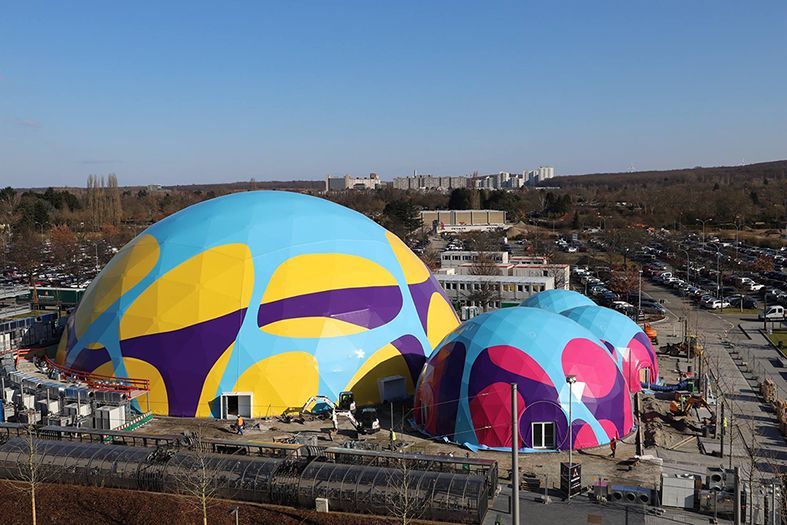 M-Sphere is the name of the large dome on Frankfurter Straße in Darmstadt. Thousands of Merck employees from more than 50 countries have submitted proposals and voted on the name.

Merck, a leading science and technology company, is currently building a spectacular tent on the grounds of its corporate headquarters in Darmstadt. The custom dome-shaped construction consists of a round steel frame, which will do without additional support and pillar elements in the interior. With a diameter of 50 meters and a height of 21 meters, it will accommodate up to 1,700 people and be one of the largest structures of its kind.

Workers are currently assembling the steel structure east of Frankfurter Strasse. It will be covered by the end of January with a membrane in the striking Merck design. The tent will serve as the central venue for many events to mark the 350th Anniversary of the Darmstadt Group this year, including the Grand Ceremony on 3 May and the Special Award Ceremony as part of the Federal Youth Research Competition on 26 May. Officially, the tent will be inaugurated as part of Merck's staff party on 19 April. The imposing lightweight construction will be open to the public on 22 September for the open day. The dome then becomes a 3,400 square meter projection screen for 360-degree films produced specifically for Merck's anniversary.

"With the innovative tent construction, we are creating an appropriate space for the anniversary celebrations in Darmstadt, where the success story of Merck began 350 years ago. We are looking forward to many great events at this unique location, "said Walter Galinat, Member of the Executive Board of Merck and responsible for the Darmstadt site.

The main tent is supplemented by three smaller variants, including the so-called Curiosity Space. The ten-meter-high dome uses state-of-the-art virtual reality technology. Twelve interactive 3D films will showcase the group's strategic future topics. Two smaller tents eight meters high will house the cloakroom and the entrance. The entire tent construction is set up especially for the anniversary activities. On October 31, the demolition will begin again.