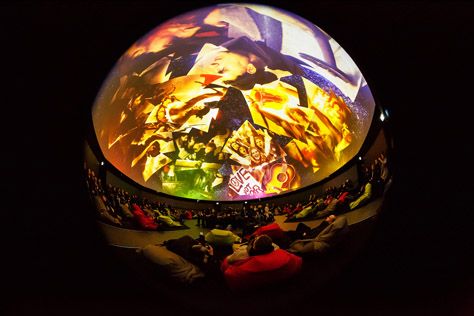 The Chinese year of the monkey could not start any better: It's a great feeling when - and after all, without being asked! - the quality of your work is acknowledged by experts.

Exhibition organizer Cornelius Zerwig from Dialog called us and praised the DURABILITY of his ZENDOME.75B. Its employment at the One World Net NRW (Eine Welt Netz NRW) is now in its tenth successful year and "continues to be very popular." "We did not expect this and are delighted to be able to maintain this exhibition over such a long period - after all, with more than 1 million visitors." Dear Mr. Zerwig, we are ecstatic about this as well!

Proof that the continued popularity of the ZENDOME is not a singular instance is also demonstrated by the Niederrhein University - University of Applied Sciences. Their ZENDOME.75M has been in service for seven years as part of the children's holiday care of the university's family services and as an event location for the faculties. In 2016, this popular gathering point will move and become an integral part of the campus grounds designed like a park. Philipp Webels, Head of Planning and Building at the Niederrhein University, said, "Apart from the environmental pollution on the membrane, the Zendome is still in perfect condition and shows no signs of fatigue."

Keyword RELIABILITY - even under extreme conditions: At the Dutch Horticulture Exhibition Floriade 2012, our ZENDOME.17000PL-h with an integrated projection membrane (Immersive Media Screen) also proved that our sophisticated systems function in an optimal manner even under the harshest outdoor conditions.

The ZENDOME.22000IMS also celebrated its first anniversary at the Europa-Park in Rust - of course without any problems. Peter Müller, Technical Manager, puts it in a nutshell: "Completely hassle free." Even Tom Müller, Project Manager of TRIAD, has confirmed our successful concept of integrating high-precision sensor technology and continuous data logging and is delighted: "The Dome of Dreams moves on to another season in 2016."

This also includes the QUALITY PROCESSING of the sophisticated Immersive Media Screen that impressed experts as it was installed in the popular Dome of Dreams. Marc Erhardt from Neumann&Müller is amazed at the screen's high quality and concludes: "Thanks to the special membrane, this is the best dome projection we've ever created."
Thank you! We are very happy to hear this.

It brings us great joy and is also a major motivation that our customers are our own "proof of concept." There is no better compliment to our developers, our entire team and our production partners - especially since it comes from genuine innovators who are also successful in the meetings industry/event market as well as architecture. The best possible quality coupled with a love for precision - we are happy to be "typically German."